As the cliché testifies, "necessity is the mother of invention". The necessity behind NEOS was a messy, winter storm over New York City in 1993.

Woody Nash, a typically well-dressed bond trader, arrived at his office with shoes, socks, and pants thoroughly soaked through with gray, Manhattan slush. He muddled through the day wearing the soiled clothing and, against his better fashion judgment, bought a pair of unsightly galoshes for the commute home. No sooner did he approach the subway, than the smooth rubber bottoms promptly sent him skidding down the stairs. By the time he arrived uptown, the flimsy material was torn and flopping about his foot. Woody fumed thinking, "There has got to be a better alternative".

That evening, he spoke to a friend, Scott Hardy, and recounted his frustration. Scott, an entrepreneur and outdoor enthusiast, lived in snowy Vermont. If there were a better version of the overshoe, he would know about it. If not, he could create one.

Like many great inventions, the first NEOS was sketched on a napkin and assembled in a garage. Scott stitched a lugged sole to a mountaineering gaiter and sent it off to NYC for Woody's testing.

Upon receiving the new overshoes, Woody boldly embarked on his commute. Serendipitously, a "storm of the century" was pounding the streets of New York and provided an unforgiving proving ground. As one person after another stopped to express interest in the homespun overshoe and Woody boasted of his dry, toasty feet, a business opportunity crystallized. New England Overshoe Company (NEOS) was born. 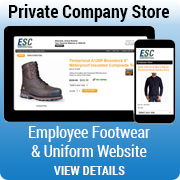